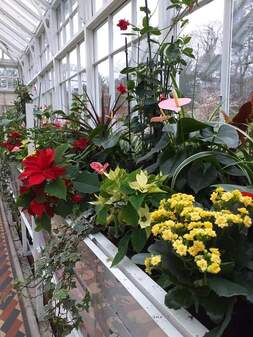 The building
In 1879, William Dixon, the owner of Belleisle Estate in Ayr, decided to enhance the amenities of his mansion house by having a conservatory built in his extensive  gardens. Dixon was a wealthy industrialist, owning massive ironworks , known as "Dixon's Blazes" in Govanhill. His conservatory in Belleisle was  constructed by a specialist company, James Boyd and Sons of Paisley. It  was a stylish glasshouse with a curvilinear roof, metal and wooden  frames and a base wall of red sandstone. The present conservatory still  sits on the same wall and is supported by the same eight pillars of cast  iron while the central cross aisle of decorative tile flooring also dates  back to 1879.

George Coats
One year after the completion of the building, however, William Dixon  died and the whole Belleisle estate was sold to George Coats of the  thread-making family in Paisley. Coats embellished the entire property,  by extending the mansion house and filling it with works of art. His  collection of fine objects included a colourful terracotta statue for the  conservatory. The statue is still a decorative feature of the building. By  the time George Coats, then Lord Glentanar, had died, Belleisle,  including the conservatory had been somewhat neglected. The estate was  eventually bought in 1925 by Ayr Town Council, partly through the good  offices of the then Provost James Gould.
George Coats
Council's park
In the years following the purchase, the Council drew up plans to  develop Belleisle as a public park with a golf course, pathways,  children's playing areas and a hotel. But what were they to do with the  conservatory? The councillors took the momentous and far-sighted  decision to repair and restore it as a public attraction with displays of  seasonal, exotic and perennial plants and flowers all year round. The  colourful shows were carefully maintained by teams of gardeners  employed in the park by Ayr Town Council. After it was opened to the  public in the thirties, generations of local families and visitors from  many parts of the country visited Belleisle and its beautiful conservatory.
Jimmy Gould 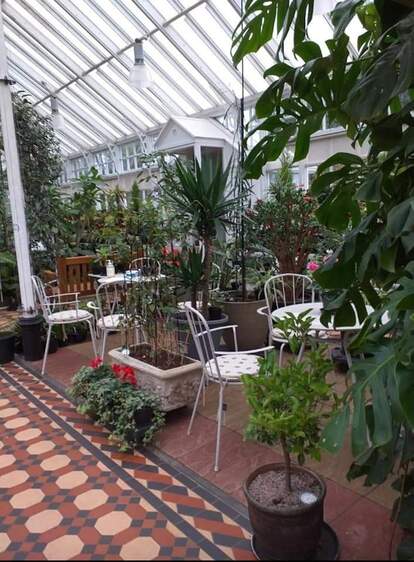 The re-build
By the 1950s, however, the 75 year-old building  was past its best and the Ayr council took the decision to have it reconstructed but in the same position as the original and using some of the same structural and design features. The new structure, built by Messrs Mackenzie and Moncur of Edinburgh, was as we see it today: straight, sloping  roof, mainly wooden framework but with the same dimensions, 70 feet long x 34 feet wide x 25 feet tall at the point of its roof.

New beginning
Thus began a new era of popularity of the conservatory for still more  generations of visitors. The building, as a feature of Belleisle Park, was  valued and looked after by successive councils in their various, changing  names: Ayr Town, Kyle and Carrick District and now South Ayrshire.  Over the decades of the sixties, seventies and eighties the role of Director  of Parks and Gardens was crucial for the care and maintenance of the  conservatory. Two particular holders of that post, the late Robert  Wakefield and his successor the late David Roy, deserve special mention  for the ways in which the glasshouse flourished.

Decline
During the nineties, however, Belleisle Conservatory gradually went into  decline. The council had difficulty in meeting the costs of maintaining it  and vandalism was increasing. In 2005 the building was closed and  boarded up. The plants inside were left to wither or to grow wild.  Branches were seen protruding though broken glass in the roof. This was  the lowest point in the conservatory's story.

BCL and restoration
On a Spring evening in 2010, a group of concerned and committed local  people met in the Abbotsford Hotel in Ayr and resolved to begin the long  process of restoring the conservatory. They set up a local enterprise  company to be called Belleisle Conservatory Limited (BCL). This was to  be a charity consisting entirely of volunteers and managed by a  committee. South Ayrshire Council (SAC) granted the committee a lease  of the conservatory and the surrounding lawns A professional survey of  the building concluded that the cost of restoration would be £583,000,  this to include strengthened re-glazing, repairing and replacing timber,  re-installing electricity and restoring heating. SAC agreed to include the  charity in a joint bid to the Heritage Lottery Fund for a major grant  covering all of Belleisle Park with a specific fund for the conservatory.  To everyone's joy, the bid was successful, with £400,000 being allocated  to BCL. The fundraising that followed aiming at £190,000 included  collection cans, sponsorships, dinners and numerous application for  grants from individual charities. To cut a long story short, the required  money was raised, a contractor, Messrs Richardson and Starling, was  appointed, work began in 2014 and was completed by 2016. 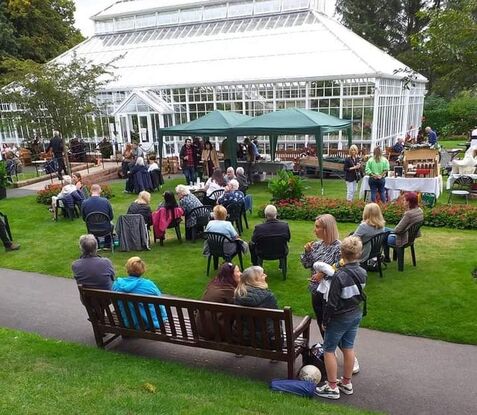 Open again
So this was when the volunteers could set up the conservatory as intended. Thea Petticrew was the committee member who ordered the plants and supervised the arranging of displays. The team went about re-creating Belleisle Conservatory as a beautiful and welcoming heritage centre to exhibit plants from across the world. The re-opening ceremony took place at 3.00pm on Saturday 23July 2016.

A company of volunteers
The tasks of planning, fund-raising and visualising the restoration of the  conservatory had all been performed by volunteers in BCL and so it has  continued. The management committee now have to run the building as a  business, accountable to Companies House and to the Office of Scottish  Charities Regulator (OSCR). Fund-raising is an essential part of securing  monies to allow the conservatory to continue to stay open.

The charity  needs at least £40,000 per year to maintain the building at the high standard expected by its visitors The committee recruited teams of volunteers to work at caring for the plants and the environs of the building, overseen by a part time horticultural manager, and volunteers to meet and greet visitors each day or to support events. These events included concerts, social soirées, business meetings, Christmas and seasonal jollifications, bee-keeping attractions and, very importantly, weddings and family ceremonies. The most recent and ambitious  project is an educational and environmental multi-media resource display  which is involving local school children and teachers. It is based on the  theme of climate change and is a follow-up to the COP26 conference in  Glasgow. These events and enterprises all involve dozens, even hundreds of folk in the community. Furthermore, according to BCL's headcount  there are about 12,000 visitors to the conservatory each year.
Back to History
Website by Websalve
- Admin Login -