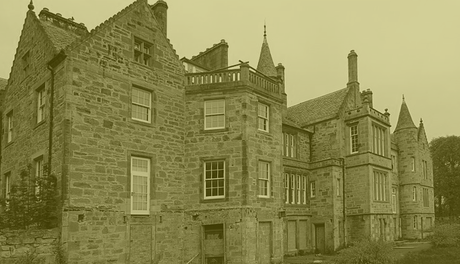 George Coats owned Belleisle estate in Ayr for over thirty years from 1886 until 1918, longer than any other owner in the estate’s history. He took a great pride in his rural domain, building a new wing on to the mansion house, maintaining the stables, embellishing the gardens and decorating the conservatory by, for example, adding a painted, terracotta statue of an African woman.


Despite having been brought up as one of eleven children, George was accustomed to living in some comfort. The Coats family had accumulated substantial wealth from the manufacture of thread in mills which they had built in Paisley. The family home was Ferguslie House, a palatial mansion located near one of their thread mills. George’s father, Thomas, was the patriarchal figure of the family and a devout member of the Baptist Church. He employed George, his third son, as a commercial clerk for a few years before appointing him as a director


In 1880 Coats married Margaret Lothian Black, daughter of the Edinburgh publisher James Tait Black and they lived first in a substantial townhouse in Claremont Terrace in Glasgow’s west end. Their purchase of Belleisle and removal there in 1886 set the scene for most of their subsequent married life. They raised a family of two daughters and one son, employed a household of domestic servants and a range of estate workers including gardeners and tradesmen. 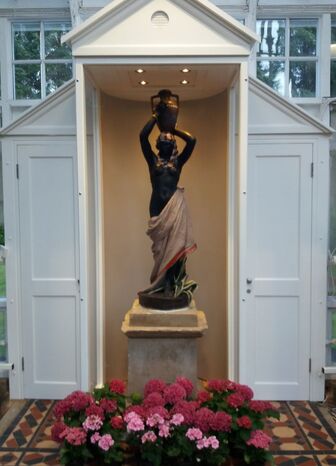 George and Margaret Coats were keen collectors of paintings, china, glass and other objets d’art. The black female statue in the conservatory was manufactured by the German ceramics firm of Villeroy and Boch in 1881 having been sculpted by artist W Pfohl. Statues in this style, made of plaster or terracotta and depicting historical, religious or mythical figures were in demand among wealthy people and institutions across Europe in the 19th century. More than one copy of this particular exotic sculpture were produced at that time and one is currently to be viewed on the website of the Brussels antique company Antiques Sablon. This item was just the type of decorative object  which would attract the interest of a young, well-to-do couple like George and Margaret Coats. As an image from a land far away, in the heart of a conservatory displaying plants and flowers from many parts of the world, it has always caught the interest of visitors from the days of George Coats down to the present day.


The conservatory, built in1879, just one year before their wedding, was maintained, stocked and tended under the attention of George and Margaret for thirty years. They also continued to take a pride in the rest of Belleisle Estate. When George decided to have a new wing built on to the mansion house, he instructed the stonemason to carve the crest of the Coats family on a pediment on the front of the building. The crest shows a shield with an image of an anchor, the trade-mark of Coats’ thread, and the family motto: FIRM.


Belleisle, however, was not George’s only property interest. Over the years, he had been investing in a wide variety of businesses and enterprises developing a substantial portfolio of stocks and shares. He and Margaret bought a house in London, near Berkley Square, from where George could conduct his financial affairs and, with Margaret, enjoy some of the fine arts of the city. In the early years of the 20th century, George was attracted by a Highland estate: Glentanar near Aboyne in Aberdeenshire. He bought the estate in 1905 and went there with Margaret, family members and servants to live. To his great joy, in 1910 he was awarded the title Baron Glentanar.


In November 1918 he died of angina and emphysema in his Highland lodge. His will and testament and the inventory of his estate showed the extent of his wealth. He had continued to own Belleisle, as well as Glentanar and sundry farms and rural houses. His wide range of investments throughout the UK and in North America and parts of Europe along with his lifetime collection of works of art and valuables were worth several fortunes. His total estate was said to be £4,334,224 and twelve shillings.

​
Baron Glentanar’s son negotiated the sale of the Belleisle Estate to the burgh of Ayr in 1925, the final, agreed price having been £25,000. Over the years, the estate had been somewhat neglected as George’s family had spent little time there. The conservatory, for example, by then over 45 years old, was described by the burgh surveyor as being in a sorry condition with broken panes of glass, framework damaged in need of repair and painting and there were no plants. He added in his report, however, that inside the conservatory there was a statue.